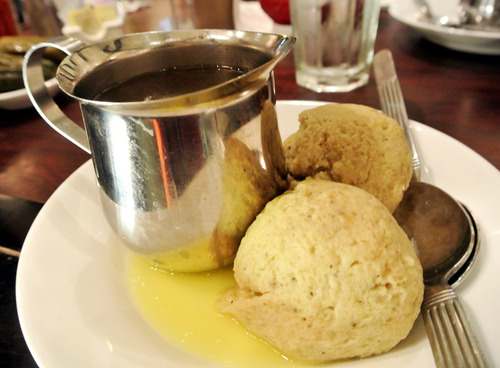 The BF and I have been to the original and historic Carnegie Deli in New York few years ago, where celebrities have been dining since 1937.

When we saw that there is a Carnegie at The Mirage where we were staying in Vegas, we just had to try it. We knew that every single item at Carnegie Deli is enormous. However, we were not sure if Carnegie in Las Vegas will be faithful to its massive sandwich counterpart in New York.

Boy, did they prove us wrong. Good thing the BF and I decided to share a sandwich for lunch. What was placed in front  of us was this colossal sandwich piled high with a pound of pastrami $20 (+$3) for sharing, He finished his but I  am definitely not built to finish half a pound of meat in one sitting. I washed my down with Bloody Mary.

The same night, we returned to Carnegie with my parents for dinner. They were craving sandwiches and salad. I wanted to see their reaction when they saw a ginormous tuna sandwich and platter of salad placed in front of them.

The pastrami I ate earlier was sitting like a brick in my tummy that I just ordered a matzo ball soup.

Carnegie in New York still cannot be beat when it comes to old diner ambiance, history and experience. The shock factor of having a meal fit for a giant is the fun part of dining. The food was good except the pastrami in NYC was a lot better. The pastrami at Carnegie Las Vegas was a little bit on the dry side but it was decent.

Being from San Francisco where sandwiches go for about $13 on average, I think the value at Carnegie is good when shared between 2 or even 3 people!

Go and convince your friends to order a sandwich each for laughs (and go home with leftovers!) 8)

$55 for the pastrami, fries, Bloody Mary and iced tea with tip